Life Raft Debate Comes Back with a Bang! 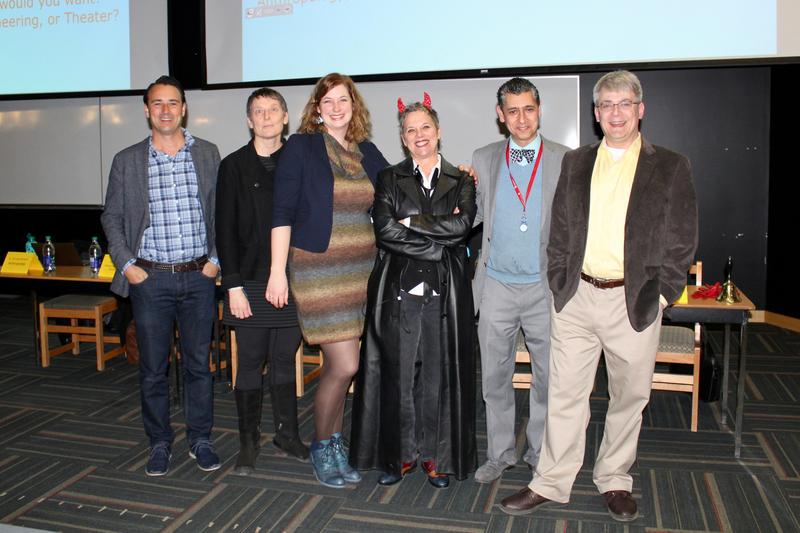 The concept is simple. The world is in a crisis; most of the human race has been wiped by brain-eating beasts who are starving for more gray matter. The only survivors (event attendees) are now on a life raft, about to sail far away from the zombie apocalypse. However, before they go and start building a new world, they have a very important decision to make. There is only one spot left on this life saving boat. Five professors desperately want to be chosen as the last survivor of this catastrophic event. To be chosen, they have to debate their way onto the raft by proving their worth as survival and future-rebuilding assets. How are they supposed to do that? Simple! By trying to convince us that their discipline is the one indispensable to construct a new society.

The debate was hosted by Prof. Peter Arthur (Education) and the structure was straightforward. Each professor had five minutes to make their initial argument. Afterwards, each debater had the chance to ask one of his/her colleagues a question. Then, the host asked the professors some of the questions that were sent by the audience through the menti platform. Finally, three minutes were allocated for a final argument.

“Our participating professors were absolutely amazing and truly demonstrated their humour and intellect as they touted the strengths of their respective academic disciplines and the weaknesses of the other profs” said Jesse Lafontaine, the creator and organizer of the UBCO Life Raft Debate.

Lafontaine continued, “The debate was a full and entertaining battle of academic intellect that touched on a wide variety of topics from survival to sex and everything in between.”

Here is a breakdown of how the debate went:

Dr. Bryce Traister was the first to present his case in the debate. His argument was based on a packing list that he created in which he suggested that Moby Dick would be an essential item to take on the life raft to fill the lulls throughout the zombie apocalypse. Throughout his debate, he made a point of literature being a much more lasting source of entertainment than sex (which apparently only lasts about 11 minutes). And of course, who better to help the survivors understand the themes and ideas in this classic novel than an English professor? Even though he did not know that he was supposed to prepare a final statement, this is when Bryce Traister managed to convert some of the attendees. With a masterfully crafted speech on human society and the true meaning of compassion and humanity, not to mention little digs at how his colleagues’ disciplines for bringing about the end of the world, Dr. Traister finished his debate strong.

Dr. Greg duManoir followed up Dr. Bryce Traister with another creative case. He argued that he could use his physical strength and stamina, as well as his rowing expertise to help the survivors on the lifeboat escape the zombies. He also said that he could help prevent sickness amongst the surviving population by sharing his knowledge about the connection between physical activity and the prevention of disease. Too bad he was somewhat taken down by the chemistry students in the audience who asked him why they should trust someone who gets the carbon dioxide structure wrong.

Dr. Deborah Buszard took a different approach to her argument. Instead of arguing that she would be more valuable than her fellow colleagues, she instead vouched for all five of them to make it on the life raft. How would this work? Simple. Buszard said that if everyone on the life raft left their devices behind (which wouldn’t work during the apocalypse anyways) then there would be room for all of them to join the survivors. Another bonus in her argument was that Dr. Deborah Buszard has an extensive background in agriculture which would be an asset in growing fruits and vegetables in different conditions.

Dr. Raymond Taheri had the most energetic and fast-paced presentation of the evening. His snappy and hilarious prezi presentation, which included photoshopped pictures of his colleagues turned into zombies, definitely showed a great amount of effort and enthusiasm. He argued that his background in engineering would enable him to repair the life raft and build structures that would be essential for survival. Taheri’s strategy was centered around sustainability. He argued that his engineering designs for the new civilization would be environmentally friendly so as not to repeat the same destruction that has occurred in today’s society.

Dr. Stephen McNeil, last year’s Life Raft Debate winner, said that his background in chemistry would be an asset for a multitude of reasons, especially when dealing with the zombies. His strategy was based on what type of zombies he was dealing with. For example, if the zombies were curable, he would seek a cure. But if not, he would create napalm or fire through chemical interactions to combat the zombies and protect the survivors. Furthermore, he argued that chemistry was the key to anything that we could desire to rebuild our future because he could take any materials and create from them. As was expected, students were really interested in recreational activities and Dr. McNeil did not disappoint when he said that he could obviously provide alcohol and drugs during the apocalypse.

Doctor Jan Cioe played the devil’s advocate for the evening. He argued that each of his five colleagues should be left behind based on flaws in their arguments. Cioe’s cases against each professor were simultaneously creative and comical and added an additional layer of depth to the debate.

In the end, Dr. Raymond Taheri, in the faculty of Engineering, won this year’s debate through a strong argument and a captivating performance. As a prize, he received a model of a life raft that was 3D printed for the winner of the competition.

After only its second year, the UBCO Life Raft Debate has proven to be a crowd favourite as nearly 450 people were in attendance for this year’s event. “Our audience was amazing and brought high energy and enthusiasm for all participating professors,” said Lafontaine. All in all, this is an inventive and spectacularly organized event where the creativity of UBCO professors and students shines through. It was also an opportunity for the student body and faculty to come together and celebrate what makes life great and that which we have to hold on to even in the darkest of times: laughter.

Lafontaine mentioned that they have already started planning the 3rd Annual Life Raft Debate where this year’s winner, Dr. Ray Taheri, will take on a brand new line up of professors.