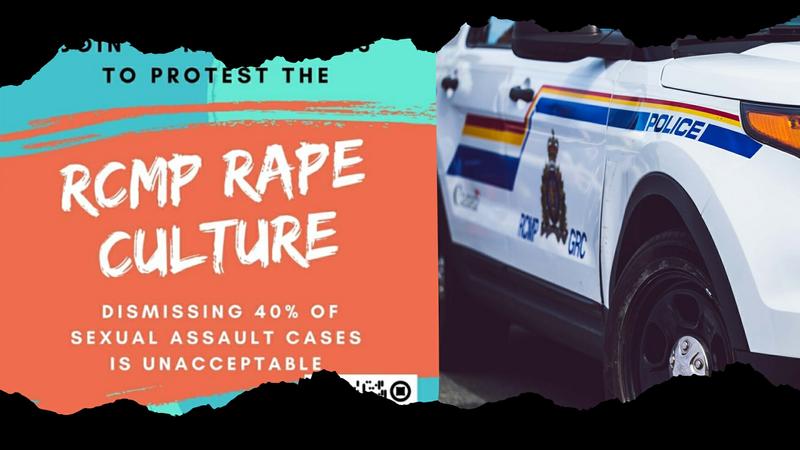 In response to a report from Statistics Canada showing a 40 percent dismissal rate of sexual assault and rape cases by Kelowna RCMP, protestors gathered outside the detachment’s Richter Street headquarters to voice their concerns. Despite the cold and windy conditions, men and women joined organizers Aden Withers and Heather Friesen on November 23, holding signs condemning the RCMP and calling for an independent investigation into the report’s findings.

Withers recently came forward as the young Indigenous woman at the centre of a shocking RCMP video interview that was released earlier this year. The 2012 video shows Wither’s, after reporting her alleged rape, being subjected to questions such as, “Were you at all turned on during this at all? Even a little bit?” by the RCMP.

In light of Statistics Canada’s report, Withers thought it necessary to identify herself: “Coming forward gives other people courage,” she said, “It gives a face to the statistic.”

Friesen, also a survivor of sexual assault, recently made headlines when she confronted Mayor Colin Basran during a council meeting held at UBC Okanagan. Referencing the Mayor’s original statement supporting the RCMP and his subsequent apology over the negative reception it received, Friesen yelled, “The survivors in this community who are too afraid to report because of the reputation of the RCMP in this community are not just anyone.”

The RCMP have declined to be interviewed on camera over the report but have stated that the RCMP’s national sexual assault review team will be investigating the matter.

“We understand that there are many questions about the roots of these statistics and we’re taking immediate steps to get answers,” wrote Corporal Meghan Foster, “We are aware that people may find the number of unfounded sexual assault cases unsettling."

During the rally, Withers expressed that she had “no confidence” in an internal investigation and insisted that the matter needs to be handled by a civilian source.