A Look into the Movie Clubs at UBCO 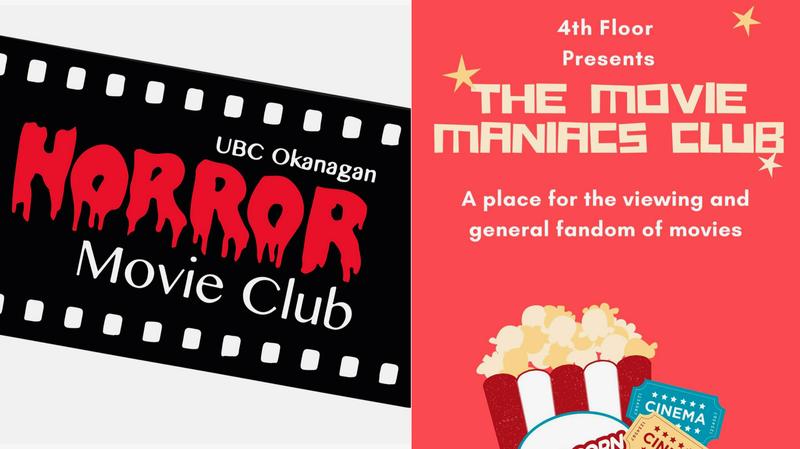 The two movie clubs at UBC Okanagan, The Movie Maniacs and The Horror Movie Club, host their movie nights on alternating Fridays in the UNC Theatre. The two clubs tend to base their movie nights off themes that are chosen by participants or the club executives themselves. Both movie clubs are known to collaborate with one another to host special events. Here is a look into each club and how they are bringing movie nights to UBCO students.

The Movie Maniacs club was officially recognized on September 24, 2019, so they are a fairly new group at UBCO. The club does not stick to a specific genre, featuring movies that range from historical fiction to zany comedies.

The Movie Maniacs club is still experimenting with how they go about choosing the movies to feature on their movie nights. The club executives, Jeff Bulmer and Pierre Frigon, tend to combine their knowledge and preferences with recommendations from participants to carefully curate the movies that they offer on movie nights. So far, they have aired movies such as The Breakfast Club, Eternal Sunshine of the Spotless Mind, and The Prestige.

The Movie Maniacs club grew out of a podcast that Pierre and Jeff do on Heatwave Radio called Classic Movies Live! The idea for the pair’s podcast was inspired by the Student Union Theatre which ran back in 2013 as a full-fledged theatre where students could watch new movies that were still in theatre. The club plans to work towards revitalizing the Student Union Theatre by sometimes airing newer releases during their movie nights.

Typically, The Movie Maniacs club has around 5-10 viewers each movie night, but this number is continuing to grow through a solid list of films and the hard work of the club’s executive team.

The Horror Movie Club started out as a small club in 2014 with very few dedicated members. Over the years, the club has expanded significantly, creating a wonderful community for those who enjoy an often neglected genre.

Suhani Srihari, The Horror Movie Club’s President, said that they have implemented a voting system on Instagram where the club’s members vote on the themes and movies that they wish to see. The club hosts a themed double-feature each movie night based on this voting system. Some of the themed movie nights from this past semester include New Age of Horror, Night of Classics and Halloween Franchise Movies.

The Horror Movie Club charges $2 per academic year for members. Through this fee, members are free to drop in and out of any movie night they choose. They have around 40 people in attendance each movie night with the majority of their members being first-year students who are looking for something to do on a Friday night.

Next semester, The Horror Movie Club’s movie nights will begin on January 24 and will continue to run every other subsequent Friday in alternation with The Movie Maniacs for the remainder of the school year.