What’s the weirdest thing that has happened in class?

Question of the week! 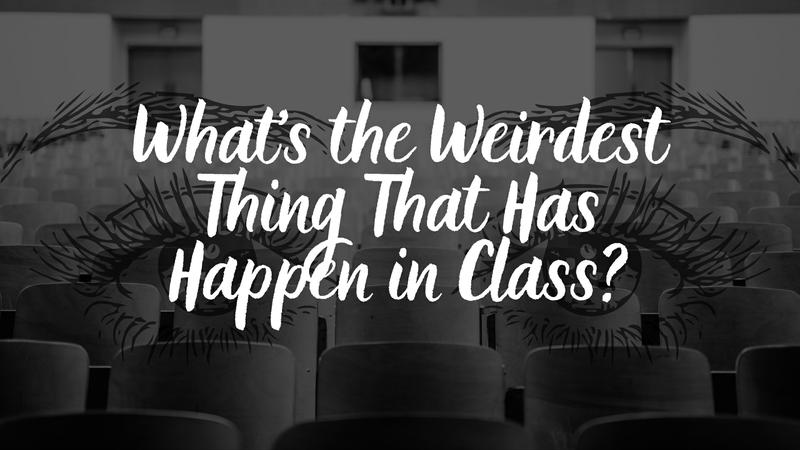 Hello again. It’s Domitius. Just popping by with another article. I hope you’re all doing well. How’s your mother? Have you called her recently? You should. She misses you, and your grandma says hello.

This time we’ll be looking at the weirdest things that have happened during class for all of y’all. We have three stories. I’ve actually got one to contribute here as well, so that brings me up to four stories to share. What’s funny, though, is that all the stories I’ve received have had one of our esteemed professors as the primary protagonist. I’m not going to tell you who’s who of course, but that’s not important anyway. They aren’t who they say they are. This was foretold in the scriptures long ago. I submit to you, the Four Horsemen:

It began with a wasp. Class had started, so everyone was seated and attentive for a minute or two already. The professor had begun lecturing. Something complicated I’d assume, based on the context I’d been given. Then, they stopped. And stood. And looked around. There was a buzzing coming from somewhere in the room—an infinitely threatening buzzing. At least, the professor seemed to think so. They directed their attention to the black-and-yellow intruder making its way through his lecture hall.

“Without paying tuition?” the professor thought, “not while I have anything to do with it”. Roused and propelled by some animalistic bravado, they made their way across the lecture hall, swatting at the intruder with the focus of a laser beam. Yet, the professor missed. And missed. And kept missing for forty minutes. Until at last, the horseman threw out his guise of mortality and assumed their final form. One swat was all it took—the beast was slain. Order was restored.

The professor taunted from their post at the front of the room, “Would anybody like an apple?” The students were hungry. It was past noon, and the room was cold—conditions ideal for grumble-tumbles. A glint in the professor's eyes said they knew this too. So they waited for a catch.

“May I have it, professor?” a voice stammered. And there it was. They acted on instinct. Without looking, the professor summoned the strength of a thousand men, their human form barely able to keep itself from shredding away into nothingness, and launched the fruit with their full power. Power can be a finicky thing though, too much is hard to control. This had been, to put it lightly, too much. The apple streamed overhead, past the hungry speaker, and found a comfortable place to die right in the face of the student behind. Apple flew everywhere. Teeth flew everywhere. Nobody ate. Jesus wept.

Students entered the classroom to find the professor writhing on the floor. The final moments of a diseased mind are something that has intrigued philosophers since death first made himself known. These students, however, were not intrigued. A better word for what they felt would be confused, or afraid. Perhaps even hypnotized. But not intrigued.

The professor made their way along the floor of the room, crawling through the maze of desks and feet. Foam dripping from their maw, eyes staring sightlessly in different directions. They cocked their head and paused before skittering behind the podium at the front of the room. And then there was silence. The students waited for the next chapter.

They didn’t have to wait long. The professor sprung up with a roar, only to have their face now covered with the hollowed head of a wolf. A trophy of war no doubt. Then, the music started. They commanded their class to sing along, like some infernal conductor, flailing their arms to the soundtrack from High School Musical as the professor pelted students with whatever candy they could pull from their pockets.

The beast stopped as well. And then the professor dropped—they were still.

The infection had reached their heart. The professor was dead.

I’ve looked into the eyes of madness. There, I saw order. They had called for us to send a champion. A proxy fighter, if you will. The challenge was simple on paper: simply recite the English alphabet with each number associated with its letter. The professor knew this was no small task though. Their eyes shifted around the room, surveying for anyone foolish enough to try. The prize was certainly enticing. In return for our chosen competitor completing the challenge, the whole class would be exempt from an upcoming quiz. This hope was meant as salt in the wound. It was meant for us to fail. It was meant for us to break.

One from our ranks steps forward.

We thought he would be doomed.

Just like we’d been through most of the semester already, we were wrong.

With each flawless letter and number that flew from his tongue, tension grew tighter. Sweat beaded on my brow and fogged up my glasses. It was mind-numbing. Apparently, it was for the professor too, as the look of excitement had fallen off their face and turned into something much darker. They were furious.

Our champion stopped. They had finished.

The battle belonged to humanity.

We will survive. To the fallen, may God have mercy on their souls.

(P.S. Please nobody sue me, I made most of this up)