The Daphne Odjig 100 exhibition, curated by Stacey Koosel, is open at the Kelowna Art Gallery from September 14 to January 5. The exhibition commemorates the artist who would have had her 100th birthday this year. 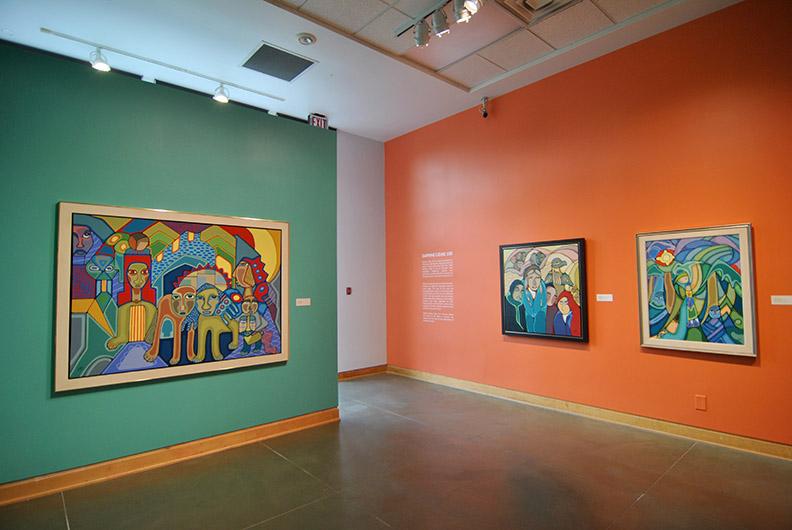 Odjig’s works are presented on four walls of a room. The walls are painted bright red and blue. The frames are of different colors. Some are black, others beige and golden. The multicolored walls and frames are consistent with the wide range of vivid colors used in the displayed paintings. The works presented belong to the period from 1968 until 1991. The techniques are collage on Masonite, pastel on paper, collage on canvas board, and acrylic on canvas. The majority of later works in the collection are acrylic on canvas.

The main idea of the exhibition is to represent some of the major themes that Odjig explored through her art. Topics included relationships with nature, Aboriginal mythology, generations, and peace. There are several paintings devoted to each of these themes and it creates philosophical depth. For instance, the exhibition contains three paintings devoted to generations: one is titled Our Children and Our Children’s Children, another Grandparents, and the third Tapestry of Time. Together, these works evoke a feeling of awe of past and future generations.

The theme of peace is explored with such paintings as Canopy of Protection, Messengers of Peace. Circular shapes and calm tones dominate in these paintings, which induces the feeling of safety. When one first sees Odjig’s paintings, the association with Picasso’s cubism is apparent. This association was caused by the fact that the depicted subjects in Odjig’s paintings are fragmented. Also, the paintings combine seemingly unlinked objects and lack shadows. Odjig’s paintings are, in their own way, unique in meaning and style. The paintings have fluent lines and often blur the boundary between humans and animals. Also, some of them are devoted to creatures from Aboriginal mythology.

Overall, Daphne Odjig 100 has both a strong intellectual and emotional impact.