“Jojo’s beliefs are challenged as he learns that not every Jew is a monster, and not every German is a devoted Nazi.” 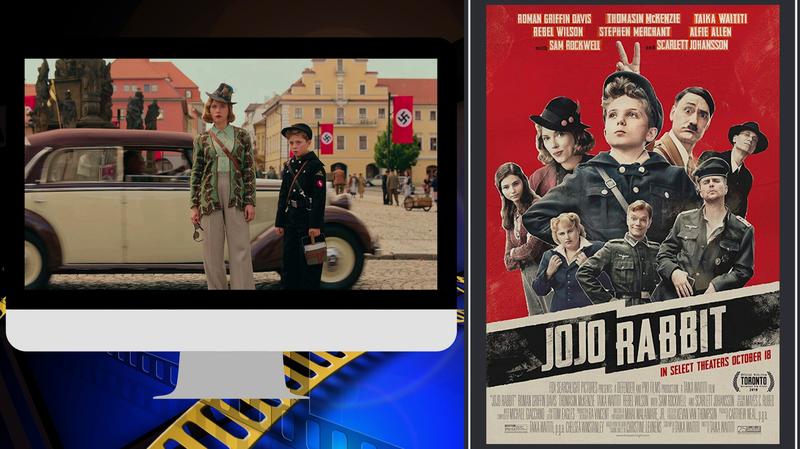 Jojo Rabbit, the latest film from New Zealand filmmaker Taika Waititi, is a hilarious political satire, a heartwarming coming-of-age story, and a harrowing look at World War II from the wrong side. With help from some excellent performances and beautiful camerawork, Waititi combines dissonant tones with unlikely themes to create one of 2019’s most memorable movies.

Jojo Rabbit tells the story of Johannes “Jojo” Betzler (Roman Griffin Davis), a zealous Hitler-youth in a village at the end of the Second World War. After a grenade explodes at youth camp, Jojo is left scarred and with a limp, making him unfit for conscription. While at home recovering, Jojo discovers that his mother has been harbouring a young Jewish girl, Elsa (played by Thomasin McKenzie). Unable to report the girl or his mother, Jojo’s beliefs are challenged as he learns that not every Jew is a monster, and not every German is a devoted Nazi.

Early into the film, we’re introduced to Jojo’s imaginary friend and Führer, Adolf Hitler (played by Taika Waititi). With Jojo’s dad away fighting in the war, Hitler takes over as a father figure. When needed, Hitler will offer fatherly advice; when not needed, he’ll brag about the cool (and usually ridiculous) things he gets to do as a 10-year-old’s idea of leading the world. Early on, Hitler proclaims “I have to go, we’re having Unicorn for dinner at my place” before diving out the window.

Hitler’s character development directly mirrors that of Jojo. Since Jojo begins as a jingoistic Nazi acolyte, Hitler begins as a fun guy. As Jojo interacts with Elsa and his closeted anti-Nazi mother (played by Scarlett Johanssen), he gradually becomes disillusioned with his country’s fascist regime. Hitler, accordingly, becomes jealous and paranoid, angrily and repeatedly reminding Jojo of his duty to the Aryan race.

In addition to Waititi, Davis, and McKenzie, Jojo features several other standout performances. Rebel Wilson plays Fräulein Rahm, an eccentric youth instructor, who usually has a story to reinforce Jojo’s latest suspicions about Russians, Englishmen, or Jewish mind-control; Sam Rockwell plays Captain Klenzendorf, a demoted officer in charge of the Hitler Youth camp with his own doubts about Germany’s chances in the war; and Archie Yates plays Yorki, Jojo’s best friend who doesn’t really care about the propaganda but does remarkably well in the Hitler Youth.

Johanssen’s performance as Jojo’s mother, Rosie, is easily the best in the movie. Rosie is a commanding presence, easily pushing around all the officials she encounters. At home, Rosie is a mother both to Jojo and Elsa, hiding each from the other, while helping them through their individual struggles. For Elsa, she tells exciting, likely untrue stories of her time as a globe-trotting resistance fighter. For Jojo, she recalls the time his father was around before the war. Johanssen herself is a commanding presence, creating a memorable character likely to see some recognition from the Academy in 2020.

Jojo Rabbit owes much to its presentation, as well. On one hand, the movie features tonal shifts that are often too abrupt – a scene of a last-ditch battle in the village featuring almost no trained soldiers is quickly followed by a darkly comedic monologue by Hitler. On the other hand, Waititi nails the tone of individual scenes, shooting terrifyingly tense scenes of wartime drama as skillfully as he creates comical coming-of-age moments.

Additionally, Jojo Rabbit features an excellent score by Michael Giacchino, as well as a curated soundtrack of 1950s-80s English pop hits dubbed into German. While not period-correct, the soundtrack choices specifically evoke Beatlemania and pop attitudes of the post-war era to show the cult of personality around Hitler, and the effect of propaganda on kids during the war.

Jojo Rabbit is as pointed as it is entertaining, with both sides strengthening each other. While Waititi’s latest is an enjoyable movie about a young boy learning about the world around him, it’s also a well-researched warning about the dangers of propaganda and blind loyalty to a cause.