Singer-songwriter sits down with The Phoenix ahead of Kelowna show. 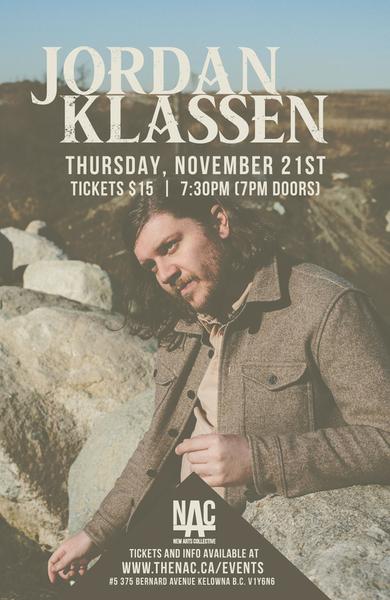 Jordan Klassen is a folk-indie singer-songwriter from Vancouver whose career spans over a decade. His contemplative songs are woven together with his own life experiences through the lens he views the world with. Klassen’s musical life began early, citing his family for his artistic upbringing, “my mom is a pretty artistic lady. She was a musician herself for a long time and now she’s a visual artist. My brother’s an actor so I was always interested in making things.” Klassen’s career today boasts five full-length records, millions of streams on Spotify, multiple tours throughout North America, Europe and Australia and a new forthcoming album on the way.

Jordan Klassen is currently on a 15-city North American tour. The current tour is in support of his newest releases, Virtuous Circle and Surprised/Not Surprised. The releases are part of a forthcoming record, which will be released sometime in 2020. Klassen describes Virtuous Circle as “the idea of being sick of myself and my own wanderings and wanting to be reborn in some way… The song is a bit like a prayer for a virtuous circle, which is the opposite of a vicious circle, a circle that inherently builds positivity upon itself.” Surprised/Not Surprised is about “being surrounded by noise and having a moment of clarity where you realize that everything’s going to be okay,” Klassen says.

Jordan Klassen will be in Kelowna on November 21st, 2019. He will be playing at the New Arts Collective. Tickets are $15 and available here. You can find out more about Jordan Klassen and his music on Instagram, Facebook, and on all streaming platforms.