“If Not on Campus, Then Where?”

The communities that form around abortion demonstrations on campus. 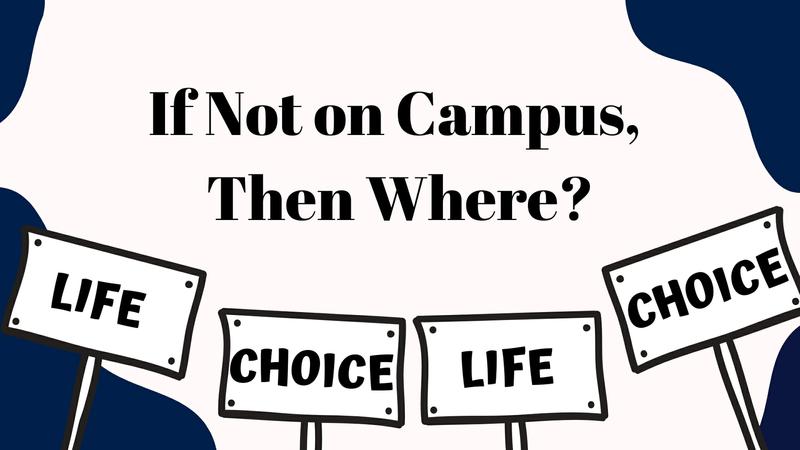 “From time to time, organizations from the wider community may choose to exercise their right of free speech and locate demonstrations at UBC,” begins the emailed notice each UBC Okanagan student sees in their inbox a couple times a year. It goes on: “UBC does not endorse the views expressed by any particular demonstration. Nor does the university ban legal demonstrations. The university values the free, lawful and respectful expression of all views and opinions, even those that some may find disagreeable or upsetting.”

Seems like pretty basic stuff. Open-minded, diplomatic, and conscious of the feelings of all involved. After informing us that the Kelowna Right to Life Society is the organization staging the demonstration, the email ends by listing a variety of resources including campus Health and Wellness, the Women’s Resource Centre, the Sexual Violence Prevention and Response Office (SVPRO), and Empower Me.

Upon the distribution of this message, there is often a brief but noticeable air of conversation around campus. Did you get the email? Buzzes through classrooms. An atmosphere of tension builds around the date and time of the demonstration, for those both for and against its presence. We know this means protests and class discussions of varying degrees. Some brace themselves to defend their pro-life stance, and some brace themselves against the trauma they may have to relive in the face of an admittedly graphic demonstration. No matter the beliefs of any one student, however, communities form around events such as this. The abortion conversation is a highly personal one, rooted not only in women’s rights, human rights, and feminist discourse, but in issues of ideological tension and controversy.

This article does not seek to defend one perspective or another, nor does it seek to condemn or support the presence of any sort of demonstrations. Rather, it will explore and exhibit the different communities that form around the Right to Life Demonstrations on the UBCO campus.

Sitting down with the Kelowna Right to Life Society

Marlon Bartram is the Executive Director of the Kelowna Right to Life Society, which he describes as a registered nonprofit organization with no defined religious or political affiliation whose mandate is “strictly education.” Bartram describes the society’s goal: “What we want to do is basically change our society from the majority believing abortion is okay, to a majority believing abortion is wrong.” He explained that, as executive director, he carries out the mandate of the board. His is the only paid position within the Society. At the interview, he was polite and eager to contribute to our piece.

When asked what the Society’s intentions were in demonstrating on the UBCO campus, he explained: “We are not there to condemn or judge or point fingers or anything like that. We’re simply exposing the truth about abortion… We [the Kelowna Right to Life Society] believe this age group is most susceptible to getting abortions… these bright young kids on campus here, [the] young adults on campus, they’re our future. They’re the people who are going to be making policy decisions, they’re our future lawyers, our future doctors, our future politicians… so, we think it’s important that they are at least exposed to the pro-life view. We don’t feel that the media at large does a good job or gives us a fair shake of representing the pro-life arguments, so we feel we need to come on campus and do that. We don’t shy away from issues because they are too difficult to talk about or they are too personal. That is what a university campus is for, the open discussion of ideas [on] all sides and not just one side… It is a legitmate opinion to have that abortion is wrong, that abortion kills a human being, [and] it should be open for discussion. If not on campus, then where?”

Arguably, the most contested aspect of the Society’s demonstrations are the graphic images displayed on their posters. When asked why they choose to include such images, Bartram said that “exposing the reality of abortion is important,” referencing past social reform movements and how they have utilized disturbing images as precedent for the Society’s use of graphic images in their demonstrations. In response to the challenge that women could see these images and feel triggered due to personal experiences, he stated that he hoped if women who have had an abortion see the images and feel triggered, they will seek healing and forgiveness.

When Maria reached out to the “Our Bodies Our Choice - UBCO Counter-Protest” Facebook group, she was connected with a woman from the Master of Social Work program on campus who used to work at a Vancouver abortion clinic. She offered insight into the process of getting an abortion, explaining that “it’s a completely safe procedure,” however “[getting an abortion in Canada] is not very accessible. It’s only offered in large urban areas and people in rural areas are pretty trapped.” She went on to point out that even though abortion in Canada is legal, it doesn’t mean that it’s accessible across the country; linking in problems of socioeconomic disparity only worsens the situation for many women who can’t afford to raise a child. When asked if there is a certain demographic that tends to seek out abortions the most, she told Maria that “There is no demographic… we see such a wide range of people and there really is no stereotype. You just have [to be able to] get pregnant.”

Our contact also elaborated on the importance of choice in a clinical environment: “We believe that the client knows what the best choice is for them... it’s always their decision to make. There is maybe a misunderstanding that because we are pro-choice, we’re pushing people to have abortions. It’s not like that at all. We probably prevent more abortions than anti-choice protesters because when we see someone is not ready, we say, ‘I think you need more time.’ Our job is to be neutral. I think there is this kind of view that we have an agenda, [but] our agenda is to help the woman figure out what’s best for her… A lot of times [individuals seeking abortions] think that they may be doing something wrong because they feel bad. And those feelings of guilt and shame, a lot of that is external and societal, and our job is to do some purposeful normalization and de-stigmatization. Just because a decision is hard doesn’t mean it’s bad or wrong.”

Maria was also invited to a free sign-making event put on by the pro-choice group, including other members of the Master of Social Work program. She described the event as an evening of compassion, empathy, understanding, frustration, and passion: a sisterhood of sorts, complete with snacks and collaboration. The gathered women referred to themselves as choice advocates, and one even brought her baby daughter along. They shared their concerns with Maria, disagreeing with the tactics used by the Right to Life Society on the grounds that the graphics are inaccurate and used to frighten and shame, and that women should not have to justify the choices they make regarding their personal health and prenatal decision-making.

Overall, the demonstrations were successful. Many individuals participated or stuck around to ask questions and have conversations or offer support. Maria spoke with some of the key groups at the event, who gave the following statements:

The Kelowna Right to Life Society: When asked how the demonstration was going so far, Mr. Bartram told us that the morning had “been going really well. We’ve had a few students come and engage with us on a rational level. And we especially appreciate how the opposition is allowing us our space and our ability to express ourselves on campus as well.”

SARA (Sexual Assualt and Rape Awareness): Explaining SARA's presence at SVPRO's counter demonstration, Tessa Baatz stated that “preferably we’d rather not be here… It’s frustrating that we have to be out here for a right we already have. It doesn’t make sense. We’re here because [The Kelowna Right to Life Society is] an upsetting presence on campus. And we always hear from students every year, ‘oh I’m so glad you guys are here.’”

Medical Students for Choice: Talia Delmedico gave a similar pro-choice statement: “We want people to know that there are choices and there is no right or wrong, it is what is best for you. And making sure people feel okay making those decisions.” Her colleague Allyssa Hooper continued, “trying to not perpetuate any stigma that other organizations may put forward… abortion is one of the most common procedures provided in the healthcare system. In Canada, 90% of abortions occur in the first trimester, which is in the first 12 weeks. So what is taken from the uterus at that time does not represent the images they [the Kelowna Right to Life Society] are currently showing.”

The atmosphere of support and conversation that builds around these demonstrations is commendable and integral to future growth and discussion around this conversation. People were learning from one another throughout this process, and our team wishes a heartfelt thanks to those who shared their experiences and perspectives with us, as well as to those whose comments didn’t make it into this piece. This learning and productive discussion will surely continue until the next series of on-campus demonstrations. This process has been one of learning and reflection for our team, and we encourage any feedback, questions, or concerns to be forwarded to features@thephoenixnews.com.

If you or someone close to you has questions about abortion or sexual health, you are encouraged to reach out to the numerous on-campus resources to help you make the decisions that are right for you as an individual. If the information in this article is any indication, no one is alone in their journey.

Where is the Line?

Your Guide to the 2019 Federal Election