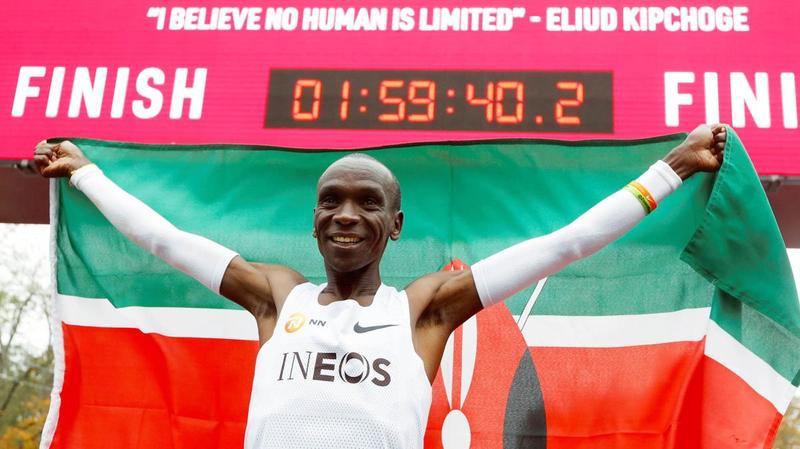 Kipchoge encourages people to never set limitations on themselves. This pivotal point in running history proves how even today, we can accomplish great things when we put everything we have into it.

Despite all the hype, Eliuds record-breaking run does not qualify for a marathon run. The run was highly engineered, and many pace runners were used to keep Eliud on pace. This is still an amazing accomplishment and Eliud is hoping it can bring marathon running up to an even more competitive level. Eliud currently holds the world record marathon time at 2:01:39 which he accomplished at the BMW 2018 Berlin marathon. This time beat the old record set at 2:02:57 by Dennis Kimetto’s world record made 4 years ago. Interestingly enough, Eliud’s countrymen are dominating the long-distance running and Kenyans are creating an identity for being the fastest longest distance runners in the world.

Marathons originally started as an Olympic sport in 1896, but its origins go deep into Greek history. According to the legend between August and September in 490 BC, Philippides, who is a Greek messenger, was sent from the battlefield of marathon and ran to Athens to announce the defeat of the Persians. However, he collapsed and died after announcing the victory. Imagine if we could know how fast Philippides ran and make a comparison to Eliud’s legendary time. Regardless, it has been a big achievement in the history of marathon running.