Cherry makes a forgivable mistake between words and meaning. 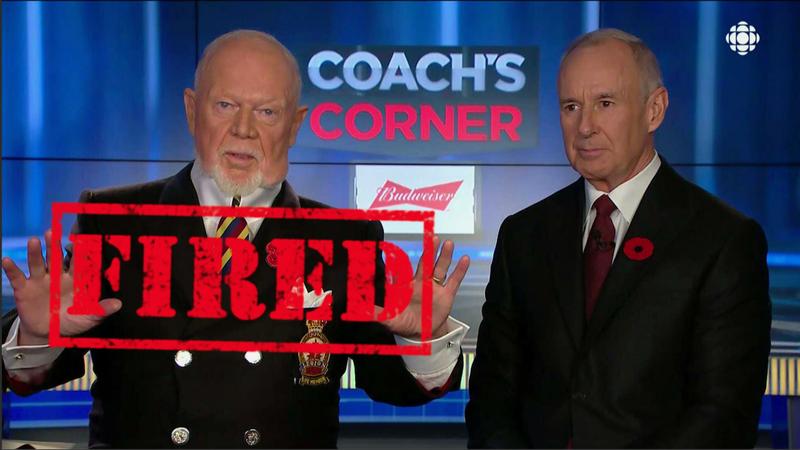 On November 11 Don Cherry was fired from SportsNet after calling out Canadian immigrants for not wearing poppies on his Hockey Night in Canada Coaches Corner Remembrance day special.

Cherry has taken a lot of criticism over the years as the host in Coaches Corner, saying various things that range from controversial to accurate. While a lot of media outlets are interested in labelling Cherry as a racist, sexist, and a variety of other names throughout the years, I think it’s important to remember that name-calling is childish and doesn’t solve any problems.

Cherry is an 85-year-old man that has arguably been the biggest personality in Canadian television in the last 38 years. Sometimes Cherry’s politically incorrect opinions have frustrated people, while others it has entertained. Now, I am not one to advocate for everything Cherry says, but his comments on Coaches Corner about immigrants not paying respect for war veterans by wearing a poppy doesn’t seem as bad as some media outlets make it out to be, especially when you consider how Canada just re-elected Justin Trudeau who was wearing blackface not so many years ago.

It really is a double standard — Canadians need to ask themselves if Cherry did, in fact, cross the line by advocating for people to show their respect by wearing a poppy. Wearing a poppy isn’t the only way to show respect, but it is a direct way to support our veterans. I think it’s important to consider not what Cherry said, but what he meant. Cherry supports the armed forces, he mentions them regularly, and he also is a major contributor to communities across Canada as well. Sure, he has his own views on politics, but I think that’s what makes him such a special character.

Don doesn’t represent a group of people; no single person can represent an entire group of people and we should keep this in mind. Cherry is his own man, he has built a career off his flashy suits and loud personality and he knows a thing or two about hockey. After all, he was a head coach in the NHL for many years. Cherry has always tried to be honest with his viewers about his values, thoughts and philosophies.

Calling out immigrants as not paying respect to veterans is ignorant, but he does get us to ask ourselves if we have given the proper respect and moments of thought to recognize the sacrifice the men and women of the armed forces have given. I think this is what Cherry was trying to say, and we should be forgiving in how sometimes this loud and brash man may say things but mean something else. Check out this short video of Cherry expressing what he meant and not what he said here.

If anything, the conversation about freedom of speech needs to happen. We need to come to a consensus on what is acceptable and what is not. In this time in history, we have no guidelines for what is permissible and not permissible — this conversation should happen across all work environments and beyond. Hence, a line needs to be drawn that is reasonable, logical and critical. People are quick to point and call names like racist, bigot and sexist, but under whose definition are these categories created? It is ignorant of Cherry to only pick on immigrants, but it’s also ignorant to assume he’s a racist.

We need to reevaluate how we define what a racist is and concentrate on tangible concrete forms of racism opposed to wishy-washy possibilities. Cherry is a good man and sometimes people make mistakes on camera. In the video, he claims responsibility for his actions and admits he poorly chose the language he used. Maybe I am a forgiving person, but anyone can make a mistake and I think it’s essential to maintain a just society by giving people the benefit of the doubt. Cherry is patriotic. Though his wording was poor, he is inherently advocating that all Canadians should show their respect, and by wearing the poppy it can express this respect and help veterans. This is my two cents.