A Day in the Life of a Creative Writing Student

This week, I will share with you a day in the life of Natasha Elliott. She is a third-year domestic student, majoring in Creative Writing and minoring in English. 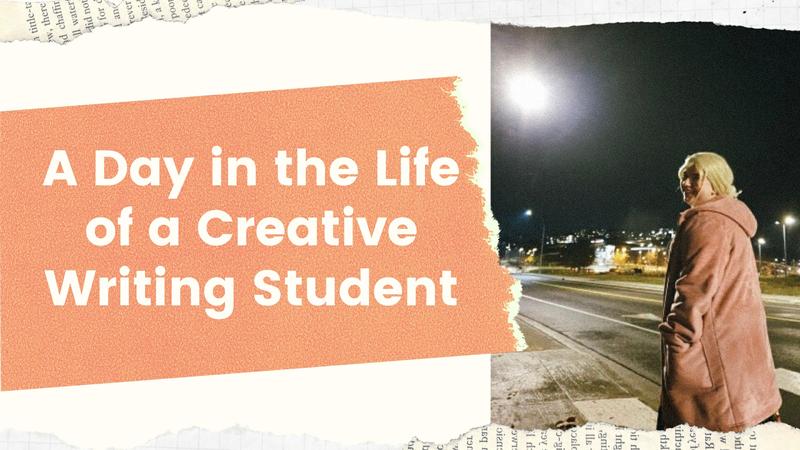 I bet a lot of you creative arts folks have had to deal with a particular reaction when you tell people your major. There is a sort of disbelief, shock, and a lack of confidence in your ability to sustain living off an arts career. Even though I knew the answer, I still asked Natasha why she chose a career path that would be so difficult, “I just knew that I wanted to write…writing gives me a voice, but it also gives other people a voice because I like to write things I want to read but haven’t seen, and I imagine there is also someone who wants to hear those stories that are not being told.”

There also seems to be a misconception about how ‘easy’ being in Creative Writing can be. You might want to rethink that idea. On the Tuesday I met her, Natasha started classes at 9:30 am and finished at 5 pm with not a single break in between. What’s more, her final class of the day is a Creative Writing three-hour lecture. When I asked how she finds the time to be human in a schedule like that, she put it simply, “I don’t.” We laughed a bit at that, though I don’t know how funny it really was.

As someone who has taken Creative Writing classes before, I know the drill. Since it can look so different from the conventional lecture, I asked Natasha to tell me how a class usually looks, “They [the classes] are very much participatory and not at all a lecture…we are encouraged to share our ideas.” Sometimes professors will even give students time to just write.

But perhaps the most interesting of teaching techniques in the Creative Writing major is the workshop, “It is essentially when you are told to write and post what you have written online; everyone else has to read it and give you feedback on it.” This sounds like a very intimidating process, but Natasha vouches for it, “It is a collaboration in improving your work. We are all learning from what we’ve done, from what other people have done and from what we all have thought about everything.” I asked, what if the writer does not agree with the feedback or opinions are different? Natasha replied, “Sometimes someone might say one thing and you might not agree with it, but it might spark a different idea in you that could still help you… It is also important to know what you don’t want.”

Our conversation about Creative Writing developed into one about Natasha’s past. Her love for writing was almost born with her and has been consistent throughout life. She shared a slightly questionable but very cute anecdote with me: “I used to write stories for my friends when I was little… I used to make everyone die.” She told me this was because she never knew how to end stories, but maybe, even as a kid, Natasha was thinking about important concepts and conversations which now shine through in her writing.

She continued on to describe a powerful topic that was tackled: “Last year I wrote a story about abortion which was difficult because I wanted to write it from a guy’s point of view, even though I’m not a guy. I also wanted to be careful to not give my opinion either way, but to present both sides and leave it open in the end to start a conversation.” This is a really controversial topic and a really controversial take on it, so I asked her more about it, “I wanted to have it from a guy’s point of view because…everyone tries to say that a guy shouldn’t have a say because it is not their body, but it still affects them and in the story I try to make it clear that it is not his say, because I do believe it is not, but I still think they should be allowed to be heard.”

Voice seems to be an important concept for Natasha. From talking to her, I discovered this was both figurative and literal. Currently, she is in her second year as the VP Internal for the UBCO Beats Trill Seekers, one of the competitive acapella groups on campus.

Her incredibly long day is not over until 9 p.m. because she has practice with the Beats at 7 p.m. However, she does not find this to be a chore, “It’s like a break for me. I prioritize the Beats a lot… even on Tuesdays when it’s at the end of my very long day… it doesn’t feel like work…It feels like a chance to destress. The best part is how it becomes a supportive family that you get to sing with and have a great time with.”

She also speaks to how being with the Beats has pushed her to her maximum potential, “I love to sing, and it is a great opportunity to push yourself out of your comfort zone. I’m always doing that in the club, I’m always trying to gain more confidence and it’s a struggle, but I’m doing it. And the people in the group are really supportive… sometimes they have more confidence in you than you have in yourself.”

As we were approaching the end of our conversation, I asked her about her future as an artist, “It is stressful. It is so hard to know what’s going to work and what’s not going to work. And obviously I want to get my work out there, but I don’t know where I want to start.” Judging from the time I spent with her, there is no doubt she has already started and will continue to amaze the world with her great stories and original voice.

Finally, Natasha has a message for those who tell aspiring writers, artists, musicians or whatever it may be, that they are not going to make it: “Well, the way I see it, if robots take over jobs they can’t really take over the creative jobs because someone still has to program that creativity in them. So, maybe one day, my job will be one of the only ones left for human beings.” Only a writer could have come up with such a creative explanation, to which she later added, “Plus, you know, it’s what I want to do, it’s what I’ve always wanted to do so… F*** the haters! Do what you love, find a way to make it work, and if it’s not exactly how you imagined, you know, just be flexible.” I could not agree more.