The Indian Culture and Dance Club (ICDC) promotes Indian culture at UBCO by providing a feeling of home. 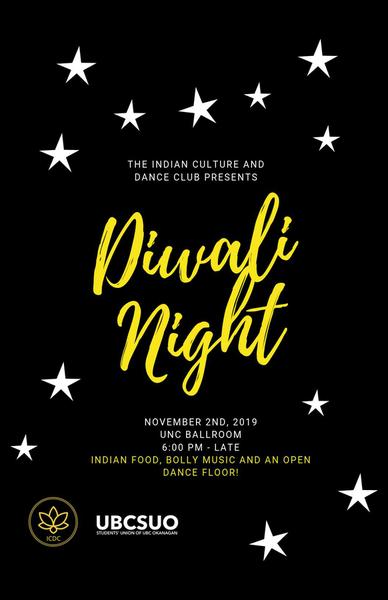 Deepavali or Diwali (literally translating to “row of lights”) is a religious Hindu festival celebrated in late October or early November. Famously known as the “Festival of Lights,” it is marked by the coming together of families and communities.

The Indian Culture and Dance Club (ICDC) aims to promote Indian culture at the UBC Okanagan campus, and Diwali Night is one of the club’s biggest events each year. This year, Diwali Night took place on November 2 in the UNC Ballroom from 6:30 p.m. until 10:30 p.m.

A three-course meal comprised of delicious Indian food was served around 8:00 p.m. Laavanya Prakash, one of two presidents of ICDC, told The Phoenix that prior to the event, “a team of people went to one of the best-rated Indian restaurants in Kelowna, New Punjab Sweets & Restaurant. A tasting was done in order to pick the best menu items and it was made sure that sufficient food would be provided.”

The evening featured performances by students and campus clubs such as the Bhangra Club, UBCO UDC, Priyaali Kanti, UBCO Ignis, UBCO ACSC, UBCO Beats, and the Indian Culture and Dance Club. Luckily the performances didn’t stop there, everyone at the event had a chance to show off their own moves to Bollywood music on the open dance floor throughout the remainder of the evening.

In addition to dancing, there was a Diwali special photo booth for friends to take home memories from the special night. There was also a Henna booth that featured a Henna artist as well as a DIY option.

Laavanya described the evening: “Being a new executive team, planning Diwali Night to occur in November was a major task that we started planning in the month of September. From logistics to execution, every minute detail of the event was planned with the utmost care and consideration.”

She continued, “There were various elements that needed to be looked after, ranging from the DJ to the décor to the booking of the facilities, security and ballroom, to invites and performances. Each executive member was assigned to a specific role in order to execute the tasks efficiently.”

All of the planning and attention to detail by the club’s executive team proved to be worthwhile as there were around 180 people in attendance on Diwali Night.

Along with promoting Indian culture, the Indian Culture and Dance Club aims to provide a feeling of home to those who are abroad, as Diwali is usually a time that is spent with family. UBCO ICDC’s events are about feeling the comfort of home and learning about the beautiful culture and traditions of India.