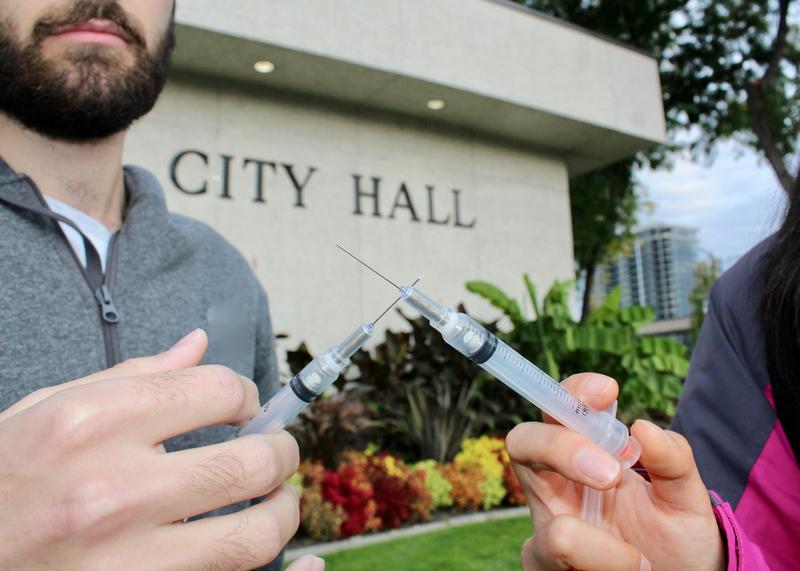 It is nearly impossible to visit downtown Kelowna without noticing the extensive drug problems that plague our city. Whether you’re standing in line at Sapphire Nightclub or strolling through City Park, the presence of drug paraphernalia and active users leaves people feeling unsafe.

Recently, the City of Kelowna attempted to address this issue by creating a new bylaw that prohibits all using material. This means that people cannot possess any drug-related equipment, regardless of whether drugs are actually present. One goal of this rule change was aimed at decreasing the number of needles on City property. While this outcome is hard to disagree with, the method of solving the problem is highly flawed.

By creating this bylaw, those who disobey will receive tickets. Unfortunately, the majority of drug users who are likely to receive these citations are unable to pay. Those who can scrape together enough money to pay are losing savings that could help propel them out of the drug scene. Angie Lohr, founder of Helping Out People Exploited (HOPE) Okanagan, explains the bylaw change to her outreach volunteers: "The entire community is in an uproar over this… please WARN our people that they are handing out tickets if caught.” These unrealistic tickets also cost the taxpayers money. In 2002, the law enforcement required for the criminalization of drugs costed Canadians a whopping $5.4 billion. Imagine if even 1% of this money was reinvested in safe using sites to prevent drug use on public property. I would argue that this would reduce the number of needles significantly more than ticketing those who cannot and will not pay.

Criminologist and professor Akwasi Owusu-Bempah has described that “unequal” policing of drugs has “profoundly harmed the individuals that are targeted, their families and their communities.” It becomes evident that this new Kelowna bylaw has substantial defects.

While money may be an essential aspect of drug policy, the value of human life far exceeds financial considerations. The most unfortunate and invigorating part of this new bylaw is that Narcan (containing the drug overdose medicine Naloxone) and harm reduction kits (clean needles with disposable sharp containers) are included in this ban.

So yes, the City of Kelowna has effectively prohibited the public from saving lives and improving the safety of drug users. This decision directly contradicts the Good Samaritan Drug Overdose Act, which aims to protect both users and those trying to help. While this act puts human lives ahead of prosecution, the new Kelowna bylaw does the opposite.

How is this moral? Why is the City prioritizing certain lives over others? Understanding harm reduction protocols in the Netherlands reveals a disappointing contrast. For example, in Amsterdam alone, there are 14 needle exchange programs. Between 1990 to 1993, approximately one million dirty needles were swapped out for clean ones, with 92% exchanged in 1992. Based on Kelowna data from 2016, only 54% of needles were exchanged. Currently, Kelowna has one advertised needle exchange location and it is only open 5 days a week for 6 hours a day. This is completely inadequate.

Decreasing the number of needles in Kelowna is undoubtedly important to keeping our community safe. However, if it comes with the cost of billions of dollars and the lives of those who need us most, I believe the City should consider an alternative solution to the new bylaw that criminalizes all drug paraphernalia. Harm reduction programs are proven to work. The lives of drug users still matter.