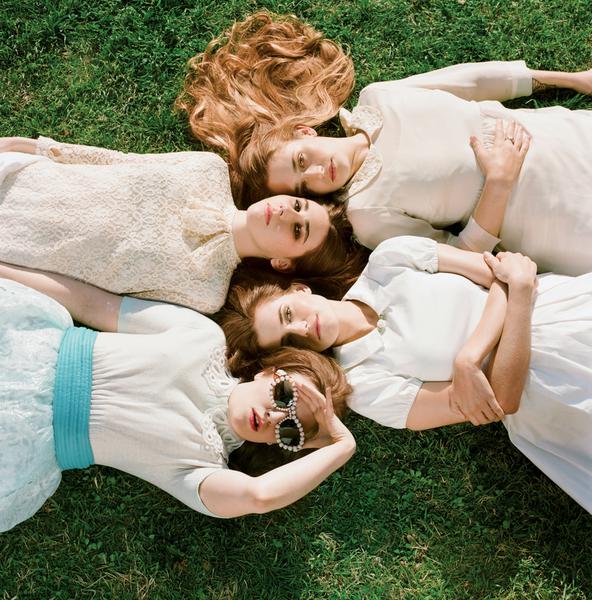 At the Primetime Emmys on September 23rd, Lena Dunham’s Girls was expected to follow up on all its hype by grabbing a few golden statues. The show was nominated for Best Comedy Series, Directing, Writing, and Lead Actress, but ironically its only win was for Casting. Since its launch in April, the HBO series has faced strong criticism for its ultra-whiteness and the stark lack of diversity in its cast, to the point that it’s become impossible to discuss the show without mentioning the issue.

The controversy surrounding Lena Dunham’s Girls is epitomized by this quote from Jenna Wortham’s article at Hairpin: “I just wish I saw a little more of myself on screen, right alongside them.” Her article touches on many issues of identification and expectation associated with being a female spectator. Many women of colour often wish to see someone like themselves onscreen, encountering the same hurdles and triumphs as the white leads. When Girls was first screened, Salon called the show a “generational event” and the New York Times referred to it as “FUBU: For Us by Us,” along with other rave reviews heralding the show as a game-changer for female-centric shows.

Soon after the praise came the backlash from numerous critics bemoaning the lack of diversity and whiteness of the show. The fact that Shona Rimes’ new show Scandal features the first black female lead on ABC in 38 years highlights how underrepresented women of colour are in mainstream television. HBO’s Girls features a white standpoint that feels rather alienating for women of colour who identify with the show.

Like many other TV shows set in New York City, Girls offers an all-white NYC populated by only a few men and women of colour who interact with the main characters. While this isn’t explicitly racist, the show marginalizes minorities by presenting the ‘universal’ experience only through whiteness. With television, a white standpoint and set of characters are the ones likeliest to garner ratings and please network executives by being most easily relatable to the hypothetical “average” (i.e white) American household.

In fairness, Girls is deliberate about the privilege and obliviousness of its characters. Unlike the broad universes of Seinfeld or Friends, which intended to show “everyday New York” but integrated only a few (stereotypical) people of colour into the narrative, Girls clearly focuses on the small world of the main quartet. Recent TV in general does seem to be focussing less on the hypothetical “average Americans” and more on specific, homogenous groups with the mainly Italian Jersey Shore cast, the Baltimore gangsters from The Wire, the Persian socialites on The Shahs of Sunset, or white women in Girls. There are of course exciting and worthy stories focused on homogeneous groups, including white homogenous groups. However, with shows like Downton Abbey (set in upper-class, WW1 Britain) or the slowly integrating Mad Men, their historical contexts explain their white casts. But Girls is a modern show set in Brooklyn, where white people make upjust one third of the population. Girls was billed as a generation-defining show that would crystallize the experience of allwomen of a certain age, class, and education. In featuring only white women having these experiences, it fell short of that billing.

Even though Girls focuses on a narrower slice of New York, it falsely assumes that that setting is almost all white —just as Seinfeld, Friends, and Sex & the City inaccurately portrayed NY in general as white. Girls staff writer Lesley Arfin tweeted “What really bothered me about Precious was that there was no representation of me” in response to Wortham and other critics who had taken issue with the show’s whiteness. Arfin’s obnoxious joke reveals that she and perhaps her fellow writers genuinely think the criticism is about people not being able to identify with characters who don’t look and act like them. What they seem to not understand is that the non-white audience doesn’t mind looking through a white gaze and seeing representations of people unlike themselves—what they do mind is seeing these girls who are like us (in their ages, interests, and experiences) except that they are all white. For the chunk of the audience who feel alienated by the whiteness of the show, it feels disheartening to be underrepresented once again.

Feminist theorist bell hooks explains that “subordinates in relations of power learn experientially that there is a critical gaze, one that ‘looks’ to document, one that is oppositional. In resistance struggle the power of the dominated to assert agency by claiming and cultivating the ‘awareness’ politicizes ‘looking’ relations—one learns to look a certain way in order to resist.” Here hooks emphasizes that in order to resist television and cinema’s usual white normative gaze, the alienated non-white spectator cultivates an oppositional gaze that resists identification and questions the presentation of gender, race, and class. If they do not adopt that gaze, then spectators can go through “a process of identification through regression”. This process involves the woman of colour identifying with the white protagonist while closing down any option for critical analysis. Many women of colour often do this and give a show a pass in order to enjoy or identify with it. When the show finishes, we come home to ourselves, and reflect on not being represented in that 30 minutes of identification and pleasure. I'll admit that this is the way that I watch most of the shows I give passes to; for women of colour, it’s hard not to slip into this approach when watching mainstream TV. 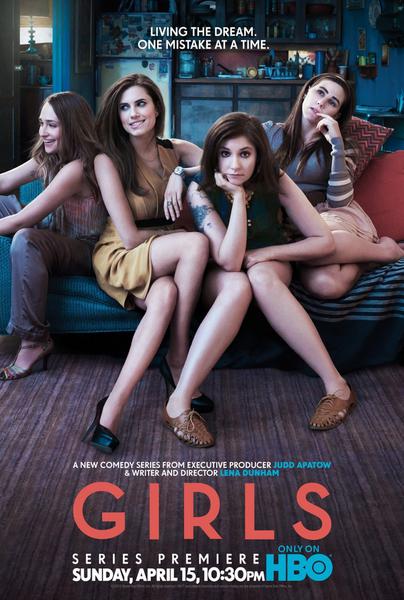 Characters of colour often don’t figure into homogenously white shows, because whiteness is a normalized way to present accessible “normal” protagonists. Whiteness is so stabilized that introducing a character of colour runs the risk of being construed as a token. When all the characters are white, a show can ignore race; but once a non-white character enters the equation race has to be acknowledged. In these cases, the mainstream gaze often reinforces its whiteness by presenting people of colour in stereotypical, essentialized roles. Girls features a few of these token people of colour such as the tech- savvy Asian intern, the catcalling black hobo, the sassy black co-worker, and the icy Indian gynecologist.

Dunham addressed the whiteness issue in an interview with Christopher Rosen at Huffington Post, saying, “When I get a tweet from a girl who’s like “I’d love to watch the show, but I wish there were more women of colour. You know what? I do, too, and if we have the opportunity to do a second season, I’ll address that. What’s nice is if I could speak for me and it’s resonant for people, then that’s about as much as I could hope for.” As Dunham states, there is a specificity in her work where she is writing from her own experiences; she also told NPR ”I really wrote the show from a gut-level place, and each character was a piece of me or based on someone close to me.” Dunham has been certainly successful in translating her vision into the universal issues that these women face which has worked for a section of the audience. Yet the show’s overriding whiteness feels distancing for many women of colour who may identify with some of the characters. Despite her statements to Huffington Post, it still seems like she really can’t get race right. On twitter she recently posted a picture of herself wearing a blanket like a hijab and joked, “I had a real Goth/fundamentalist attitude when I woke up from my nap.” Dunham comes off as glib and offensive, which does little to endear to women of colour who already feel excluded from her whitewashed vision.

White to the Core?

Dunham herself acknowledged in the NPR interview that she has difficulty getting outside of her whiteness, saying, “This show isn’t supposed to feel exclusionary. It’s supposed to feel honest, and it’s supposed to feel true to many aspects of my experience. Something I wanted to avoid was tokenism in casting ... Not that the experience of an African-American girl and a white girl are drastically different, but there has to be specificity to that experience [that] I wasn’t able to speak to.”

It does make sense that Dunham would be wary of diversity for diversity’s sake. Many of television’s minority characters are added to shows to lend a certain faux credibility to the storylines, and there is a possibility this will happen on Girls given the mounting pressure to include a person of colour. Since Dunham’s view as creator is, as she seems to suggest, fundamentally white, then a minority voice should be added to the creative team, not just the cast – not to appease critics but help the show reach its potential as a chronicle of the experiences of our generation of women. In light of the praise and accolades, Girls is clearly sold as a generation-defining show, which Dunham has willingly accepted. In taking up that mantle of “generation-defining”, Dunham and co. have renounced their ability to pass the show off as simply a personal narrative.

If the show wants to be an example of a seminal and generational-defining show for countless young women, then it cannot shrug off its universality just because Dunham has written the show from her own experiences and her intensely personal vision. The whiteness of the show seems to betray the vision of it being a universal space where a wide range of women may identify with the quartet and recognize the same faults and problems they’ve encountered as well. If the show was meant to be a retelling of experiences and newcounters of post-collegiate twentysomething women, then it crucially misses a section of the female audience that would be on board with it. If the show is going to deal with the large group of women facing the same problems as her, then she should step up and feature diversity instead of shirking away from the issue (and ignoring the “generation-defining” mantle) when it becomes glaringly obvious and inconvenient. Dunham is right to stand by her vision by making her justifications for the show’s whiteness in interviews to Huffington Post and NPR. But she needs to decide if that vision is telling a personal story of her and her friends or telling the story of the wide group of women with experiences like hers.

In a season where the wildly successful Bridesmaids had already gotten the ‘girls can be funny too’ ball rolling, Girls was expected to capture that zeitgeist and succeed as a realistic representation of twentysomething women. It presents a largely relatable show that distances itself from those of us who identify with the problems presented. We either need to continue adopting the oppositional gaze when watching TV or look to other avenues to resist the hegemonic narratives offered by television, such as web series like The Misadventures of an Awkward Black Girl or independent TV networks. There was, and still is, a lot of pressure on Girls to be so many things for so many women and so far it’s fallen short. But here’s hoping that somewhere a non-white 25-year-old just successfully pitched a show that will show the rest of us onscreen.

Where is the Line?

“If Not on Campus, Then Where?”